On December 9th, 2016, two schoolgirls entered a crowded marketplace in Madagali, Nigeria. The young girls, posing as customers, paused to shop at a stall selling grain and second-hand goods. Suddenly, they detonated the two suicide vests hidden under their clothing, killing and wounding over 100 civilians.1 Instances like this have become common in Nigeria’s Borno province and throughout West Africa’s Lake Chad Basin. Locals live in constant fear of these suicide attacks, the vast majority of which are carried out by the insurgent group Boko Haram. The terrorist organization has worked in violent opposition to the Nigerian government and its allies since 2009, using an unprecedented number of young girls as their martyrs.

Suicide terrorism itself is a rare, although increasingly popular, destructive, and horrifying tactic employed by terrorist groups, often as a last-ditch effort in conflict. Boko Haram has become an anomaly by exploiting fleets of young females and using them as suicide attackers. Although female suicide bombers have been used by other insurgent groups, Boko Haram is employing young female bombers at significantly higher rates. Since 2015, about 60% of the suicide bombers in attacks linked to Boko Haram have been perpetrated by females, and this number continues to rise.2 Many questions still exist as to what group strategy may be driving the group to employ this unusual tactic. To begin to answer these questions, this paper will present a brief overview of relevant empirical data on Boko Haram’s suicide attack campaign.

Who is Boko Haram, and Who Are Their Suicide Bombers?

The group commonly referred to as Boko Haram––and self-identified as Jama’at Ahl al-Sunna lil-Da’wa wa al-Jihad––has been operating in Northern Nigeria since 2002. Boko Haram emerged as a religious cult based on a disavowal of Western culture as well as the adoption of Western customs by Nigerian elites. The group has continuously conducted insurgent operations against the Nigerian government since 2009 and has recently spread its efforts to the neighboring countries of Chad, Cameroon, and Niger. In 2015, Boko Haram pledged allegiance to the Islamic State (ISIS) and has since cemented its reputation as one of the world’s most brutal Islamist insurgent groups. Despite numerous counterinsurgency efforts by the Nigerian government and its allies, Boko Haram has proceeded to escalate its use of unconventional and often indiscriminate violence against military and civilian targets.

Figure 1 displays the overall gender breakdown of Boko Haram suicide bombers since 2011, where cases in which the gender of the bomber was unknown coded as “Presumed Male”. There has been a strong increase in female bombers since 2014, as well as an increase in the overall percentage of bombers that have been female. Particularly striking is the fact that the group has been employing male bombers for almost twice as long, yet the total number of female bombers continues to surpass that of male bombers. Although there have also been an increase in the number of male bombers––as an indicator of the expansion of the suicide attack campaign––the overall percentage of bombers that are male has decreased. 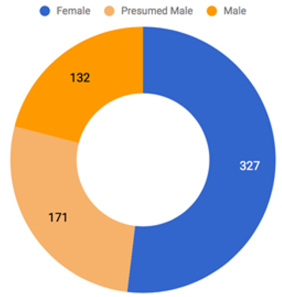 The spike in female bombers leads to questions concerning how and why Boko Haram garners so many young female combatants. Many of the girls are reported to have been forced into joining the group, having been either kidnapped or sold to Boko Haram by their parents.4  Oftentimes, there is dispute over whether the girls have agency in the attacks they are committing, or whether they are being coerced into perform such heinous operations. Multiple reports present instances of girls being coerced into becoming suicide bombers, or threatened with “martyrdom” if they did not cede to the demands of their husbands. Some girls, however, have been reported to join the group or become suicide bombers of their own volition, yet it is difficult to decipher the range of motivating factors behind the individual bombers.3

Boko Haram’s female suicide bombers are also notoriously young. Currently, little to no reliable data exists concerning the ages of each individual attacker, although news reports commonly provide age range estimates as recounted by witnesses. Numerous interviews with witnesses and former group members indicate that a large portion of the attackers are teenages or even chidren.4

Women and children’s strategic position within Boko Haram, and their value to the group as a whole, lie in their ability to aid in prolonging group survival. As men may be perceived as being more effective in combat than women, men can be preserved for more conventional fighting, whereas women and children are often utilized for their ability to discreetly carry bombs into populated areas. Furthermore, using unconventional fighters such as women and children has a powerful shock value, demonstrating to global audiences that the group is willing to go to extreme lengths in order to achieve its goals.

Who Are the Bombers Targeting?

As demonstrated by Figure 2, the majority of Boko Haram suicide attacks are aimed at civilian targets. Boko Haram rarely targets political buildings, groups, or individuals, and instead directs most attacks towards soft targets and security forces.5 Figure 3 displays the percentage breakdown of targeting by the bomber’s gender. A higher percentage of female bombers are used against soft civilian targets, whereas male bombers are utilized against security targets at a higher rate.The very small number of attacks against political targets have on the whole been carried out by male attackers, yet attacks against this target type are extremely rare in comparison to the others. Looking solely at instances where attacker gender has been confirmed may easily lead to the conclusion that there exists an underlying targeting logic related to gender: females attack civilian targets, males attack security and political targets. Yet, in cases where attacker gender is not explicitly specified (ie. “Presumed Male”) are counted as male, a trend in gender-based targeting may appear less convincing.

Although Boko Haram has been employing suicide terrorism as a battle tactic since 2011, the group did not begin to use female bombers until 2014. The first attack by a female bomber occurred shortly after the group kidnapped 276 schoolgirls from the Government Secondary School of Chibok, Nigeria in April 2014. The Chibok Girls’ abduction captured international media attention, reaffirming that attacking soft civilian targets––especially women and children––produces a unique and poignant shock factor. It is likely that the group continues to utilize young female bombers in order to garner publicity and intensify the coercive psychological effects of suicide attacks.

Sharp increases in female suicide attacks have occured at multiple points during the group’s campaign. Each of these spikes have coincided massive efforts by the Nigerian government to eradicate Boko Haram. Figure 4 tracks the number of suicide attacks over time by attacker gender. The graph is broken down by quarters and denotes the largest counterinsurgency campaigns launched by the Nigerian state. Each spike in suicide attacks is shown to be shortly preceded by a large military effort. Suicide attacks multiply in the wake of counterinsurgency campaigns, as the group fronts a retaliatory effort against the state. Furthermore, these spikes may point to female suicide attacks as being a last-ditch effort employed by the group when faced with a grave existential threat. Boko Haram has the ability to utilize females as suicide bombers and preserve male militants for combat operations.The group is challenged by the more powerful foe, finds itself greatly weakened and in need of inexpensive fighters, and looks to send a message in the most potent way possible. 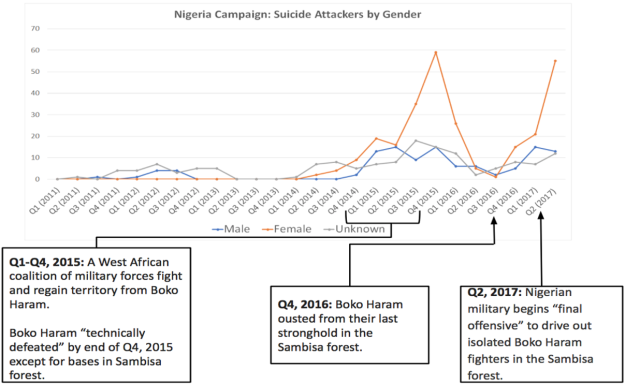 As Figure 2 demonstrates, the first large spike in female suicide bombing occurred just after a major operation by the Nigerian government and Joint Multinational Task Force to retake territory in Borno and Kano provinces. This territory had been captured and occupied by Boko Haram since early 2014. The spike in female bombing came not during the efforts by the government, but afterward, likely as both “punishment” for the State’s offensive, and as signaling that the group was still able to cause significant damage. Similar events took place at the end of 2016, as the Nigerian government aimed to push Boko Haram from its last territorial holdings in the Sambisa Forest area. After the effort, Boko Haram retaliated, utilizing large numbers of female bombers in attacks in early 2017. This pattern of government offensive and insurgent retaliation prompts further statistical study into the mechanisms at play. Questions arise as to why other groups do not retaliate against suppression through by utilizing female bombers. Yet, it is clear that the group has latched onto the idea that utilizing women as weapons is a truly astonishing and poignant tactic. It is likely that the group believes that utilizing female bombers is the most effective way of sending its message to a both a domestic and international audience.

Why Does This Matter?

Both Nigerian presidents Goodluck Jonathan and Muhammadu Buhari had pronounced Boko Haram to be ‘defeated’ several times, including after the 2015 and 2016 surges against the group. Yet, with each pronouncement the group continues to resurface. Every surge causes the group to incur large losses, as the power dynamic in the conflict heavily favors the state military. Boko Haram’s use of female suicide bombers comes as a last ditch effort for the group to recover from its large losses. In this, the group’s utilisation of females as suicide bombers demonstrates a perceived existential threat and may even act as an indicator of crucial group weakness. As Boko Haram faces more and more of a threat to its existence, the group is willing to break even the most basic norms to achieve strategic advantage.

Walker, Andrew. Eat the Heart of the Infidel: The Harrowing of Nigeria and the Rise of Boko Haram. London: Hurst & Company, 2016.